The Citizens Committee for Better Medicine is proud to present “The Wallach Revolution  – (An Unauthorized Biography of a Medical Genius)”. The book is now available and chronicles the challenges, successes, and unique perspective of Dr. Joel D Wallach, a true pioneer in the field of science-based, clinically verified medical nutrition. (No portion of the content on this site may be exhibited, used or reproduced by any means without express written permission of the publisher.) Click HERE to get your copy of this brand new book!
Chapter 12 Page 1

The Race Based Gene Fallacy

August 28, 1963, is among the most critical dates in American history.  On that date a large mass of over 250,000 people participated in the March on Washington for Jobs and Freedom.   On that sweltering August day, the temperature in Washington reached an uncomfortable 87 degrees Fahrenheit with high humidity.  The Black and White marchers walked from the Washington Mall to the Washington Monument and then to the Lincoln Memorial.  There huddled together in what was one of the largest gatherings ever to assemble at that point in the nation’s history, the civil rights activists heard ten addresses, including among them those of civil rights activists Roy Wilkins, John Lewis, and Charlton Heston.  Before the very last speaker rose to give his remarks, the President of the American Jewish Congress, Joachim Prinz, equated the discrimination experienced by the Jews throughout history with that of Blacks.  After Prinz, there would be one more speaker.  The audience was generally fatigued.  It would take quite a lot to move them from a state of weariness induced by the long day, the high heat, and the humidity.

The last person to speak had been forewarned by one of his advisors not to use lines he had lately used in several other speeches around the country.  That aide, Wyatt Walker, told the speaker, “Don’t use the lines about ‘I have a dream.’”

As all three major television networks broadcast the speeches, including the last delivered by a person who, until that point, remained largely unknown to most Americans: the Reverend Martin Luther King, Jr.  The words King uttered that day instantaneously entered that rarified lexicon of history which records for all times the most momentous speeches ever made.  From the moment King opened his mouth to speak his words captivated the nation watching their black and white television sets.

His “I Have a Dream” speech is among those works of rhetoric, so brilliantly crafted and poignantly delivered, that it has never been forgotten, resurrected year after year in classrooms, in programs, and in commemorative events that have occurred around the world ever since.  One year after King delivered his most famous speech, he was awarded the Nobel Peace Prize and the 1964 Civil Rights Act passed, tremendously fueled by the popular impact of that one speech.  King’s “I Have a Dream” riveted the nation North and South, starkly revealing the horrible lie that was racial inequality. 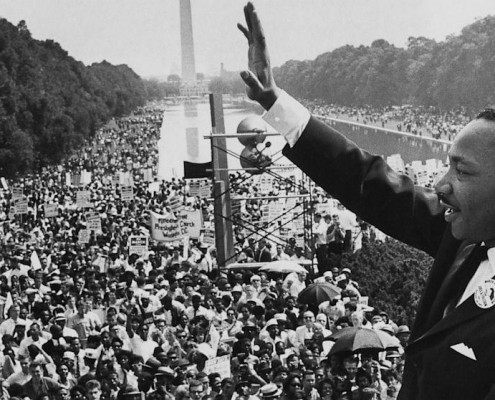