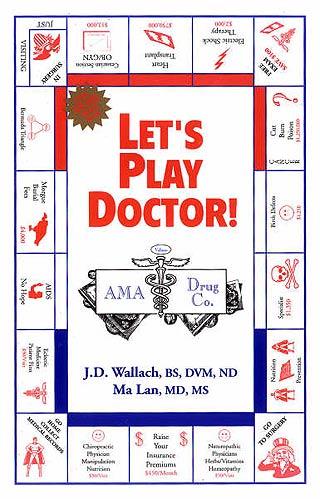 For Wallach, the knowledge that, for example, pica was a condition of mineral deficient animals translated easily into the conclusion that human cravings were likewise indicative of mineral deficiencies in humans.  For Wallach, muscular dystrophy deemed incurable in humans was substantially the same as white muscle disease, stiff lamb disease, and mulberry heart disease in sheep and pigs where it was understood to be curable through complete vitamin supplementation complemented by extra doses of the trace mineral selenium.  For Wallach, Type II diabetes in humans was substantially the same as Type II diabetes in marmosets, alligators, and shrews where it was preventable and curable with the trace minerals chromium and vanadium.  For Wallach, cerebral palsy in humans was quite similar to cerebral palsy in llamas, where it resulted from a copper and zinc deficiency.  For Wallach, spina bifida in humans was largely indistinguishable from spina bifida in monkeys, where it was preventable through prenatal ingestion of folic acid and zinc.  The associations Wallach made cover nearly the universe of all major human diseases.  In each case, Wallach had found comparable cases in animals.  He established in animals that each disease was associated with a particular kind of vitamin, mineral, amino acid, or fatty acid deficiency and would either be curable or preventable by ensuring adequate amounts of the nutrient in the daily diets of the animals.  In his later experience as a human physician, Wallach found repeatedly that the treatments he used to cure animals frequently worked to prevent and cure the disease in humans.

In Chapter 6 of his book Let’s Play Doctor, Wallach lists over 350 different disease states in humans that he has found through animal and human research to be associated with nutritional deficiencies or nutritional toxicities resulting from ingestion of specific nutrients to excess.  In Chapter 10 of Let’s Play Doctor, he identifies specifically tailored nutritional interventions, combinations of nutrients at specific dose levels, that he has discovered to be effective in treating disease.  He provides that listing for each of the over 350 diseases referenced in the book.