The Citizens Committee for Better Medicine is proud to present “The Wallach Revolution  – (An Unauthorized Biography of a Medical Genius)”. The book is now available and chronicles the challenges, successes, and unique perspective of Dr. Joel D Wallach, a true pioneer in the field of science-based, clinically verified medical nutrition. (No portion of the content on this site may be exhibited, used or reproduced by any means without express written permission of the publisher.) Click HERE to get your copy of this brand new book!
Chapter 17 Page 1

Because over 100,000 people die each year from properly prescribed drugs, because FDA approved drugs not infrequently produce side effects worse than the diseases for which they are indicated, and because modern medical practice shuns use of nutritional medicine in favor of the pharmaceutical model, Wallach has effectively declared war on conventional medicine.

In recent years as a train of FDA medical reviewers, including the FDA’s Associate Director of the Office of Drug Safety, Dr. David Graham, have testified repeatedly that FDA is a hand maiden of the drug industry.  In particular, they have consistently testified that FDA has approved drugs to market over the objections of the agency’s own medical reviewers, who have complained variously that the drugs approved were unsafe (meaning that they carried with them side effects that were worse than the underlying conditions).  They have said that FDA does the bidding of the drug industry and, to quote Dr. David Graham, leave the American people largely “defenseless” against dangerous drugs.  Among the drugs cited by these medical reviewers as dangerously unsafe and associated with significant adverse effects are Vioxx, Zoloft, Paxil, Avandia, Serevent, Lipitor, Boniva, Trasylol, and Ketek, to name just a few.

In Let’s Play Doctor, Wallach puts it this way:

The United States government (FDA, NIH, legislation), the pharmaceutical industry (drug companies) and the AMA have formed a “ménage a trois” or triangle that we choose to call the “Bermuda Triangle,” “a black hole,” a vortex out of control that sucks us all ever closer to destruction.

The “orthodox” medical system is an artificial system that depends on our government to survive.  If it were left to the people, they will always choose a less formidable and less complex health care system.  Under the protective and loving wing of the government, “orthodox” medicine has flourished as a house of cards.  Today the medical-pharmaceutical complex costs Americans more money each year than does all the military and Pentagon spending combined . . . 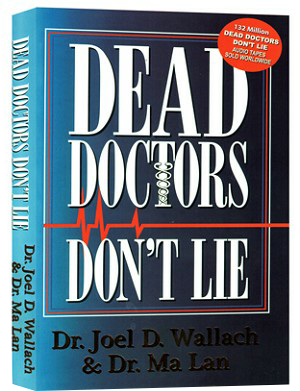 Across the country in lecture after lecture, Wallach reveals the ugly truths of this “medical-pharmaceutical complex.”  He explains how conventional practitioners shun safe, inexpensive, and effective nutritional interventions in favor of patented synthetic drugs that often carry with them lethal side effects.  He explains that more times than not drugs approved by the FDA mask symptoms but do not treat underlying disease conditions which depend on nutritional support for cure.  Indeed, he explains that commonly prescribed treatments often worsen the patient’s condition or even aggravate the underlying disease.  He explains the irony of modern medicine—how doctors professing adherence to the healing arts are incapable of not only extending the lives of most patients who suffer chronic disease but are also incapable of extending their own lives.  Relying on evidence of physician mortality, he shows that repeatedly physicians die at an average age of 58, long before ever reaching the status of octogenarians.